''...Rozle was a great guide, wonderful host, and he has a great ability to get along with many different personalities...'' 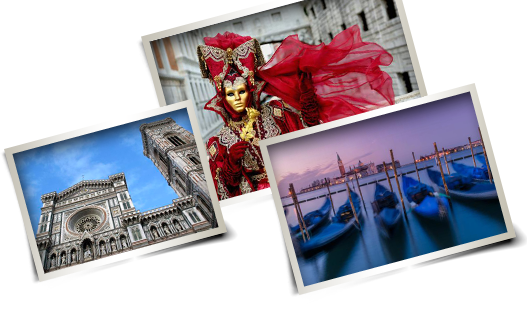 Italy became a nation-state in 1861 when the regional states of the peninsula, along with Sardinia and Sicily, were united under King Victor EMMANUEL II. An era of parliamentary government came to a close in the early 1920s when Benito MUSSOLINI established a Fascist dictatorship. His alliance with Nazi Germany led to Italy's defeat in World War II. A democratic republic replaced the monarchy in 1946 and economic revival followed. Italy is a charter member of NATO and the European Economic Community (EEC). It has been at the forefront of European economic and political unification, joining the Economic and Monetary Union in 1999. Persistent problems include sluggish economic growth, high youth and female unemployment, organized crime, corruption, and economic disparities between southern Italy and the more prosperous north.

Italy has a diversified industrial economy, which is divided into a developed industrial north, dominated by private companies, and a less-developed, highly subsidized, agricultural south, where unemployment is high. The Italian economy is driven in large part by the manufacture of high-quality consumer goods produced by small and medium-sized enterprises, many of them family-owned. Italy also has a sizable underground economy, which by some estimates accounts for as much as 17% of GDP. These activities are most common within the agriculture, construction, and service sectors. Italy is the third-largest economy in the euro-zone, but its exceptionally high public debt and structural impediments to growth have rendered it vulnerable to scrutiny by financial markets. Public debt has increased steadily since 2007, topping 126% of GDP in 2012, and investor concerns about the broader euro-zone crisis at times have caused borrowing costs on sovereign government debt to rise to euro-era records. During the second half of 2011 the government passed three austerity packages to reduce its budget deficit and help bring down borrowing costs. These measures included a hike in the value-added tax, pension reforms, and cuts to public administration. The government also faces pressure from investors and European partners to sustain its recent efforts to address Italy's long-standing structural impediments to growth, such as labor market inefficiencies and widespread tax evasion. In 2012 economic growth and labor market conditions deteriorated, with growth at -2.3% and unemployment rising to nearly 11%, with youth unemployment around 35%. The government has undertaken several reform initiatives designed to increase long-term economic growth. Italy's GDP is now 7% below its 2007 pre-crisis level.

Three equal vertical bands of green (hoist side), white, and red; design inspired by the French flag brought to Italy by Napoleon in 1797; colors are those of Milan (red and white) combined with the green uniform color of the Milanese civic guard (note: similar to the flag of Mexico, which is longer, uses darker shades of red and green, and has its coat of arms centered on the white band).